By now, it’s well documented in this blog my never ending quest for some multiplayer challenge. My regular friends, due to the fact that most of them didn’t had computers of their own, were rubbish players. Still, this doesn’t explain why Amiga owners Palmtree Paul and Magellan Joe were so terrible. Since I was quite far from the epicentre of Amiga championships, I had no other choice than making up and imagining my own tournaments. Most of the time, our multiplayer sessions were spent playing football games, since those were something there everyone liked, even the shittier ones like Manchester United Europe or Emlyn Hughes. As I discussed before, I used to impose on myself some handicaps for some extra challenge, like playing with my left hand. There were other games though, that while were among my favourites, most of my friends didn’t care much at all. And chief among those was Rodland.

This game still stands for me as the pinnacle of arcade conversions on the Amiga. This is older, pretentious me talking, because at the time I had no idea of its origins, since I wasn’t even old enough to get into an arcade salon. I played the game not long ago, maybe a couple of years, in both its original arcade incarnation, and the Amiga conversion, and it’s still an incredible slick and enjoyable platformer. I dare to say it’s even better than the Arcade original, but maybe this is just nostalgia speaking. 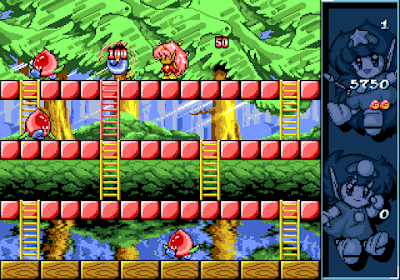 I like this game so much, that I got ahead of myself in describing the technicalities before even playing it. One cool thing that the game allowed was to save permanently the high scores, and this is where my imagination, and most of all, sadness of being, came into play. I used to write the names of my friends on the high score table, so that I could have some extra incentive to beat those scores. And when I beat them, I would write the name of another friend. I don’t know if I ever wrote my own name. That an honour that was reserved for when I finally beat the game, which never came to be, even though I was very close. I know this is supposed to be an easy game, so that just shows that I wasn’t that much of a good player. It was everyone else that was too crap. 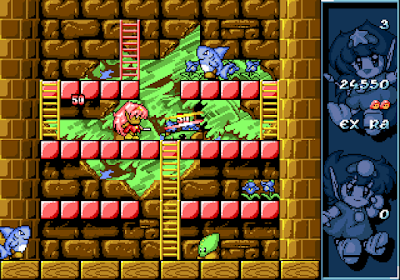 One thing I love so much from games of this era is how many developers were trying to “out-cute” every other when it came to aesthetics and sound. Nowadays, “gritty” is the word, and I just can’t try and imagine either the dudebros or the Twitch generation getting along with this stuff. As for myself, I love the jolliness of it all, and it never made me feel like the testosterone levels were dropping down from playing either this or Rainbow Islands, but I grew up on this stuff.

The controls are as slick and precise as I remembered, which makes picking the game again feel like riding a bike. Keep in mind that I'm a very shitty bike rider. But all the gameplay details and meta-mechanics were still in my subconscious. One example is how farming for extra lives work: Rodland has a very nice risk/reward mechanic when it comes to it, which boils down to gather all the flowers in the level before killing all the cute things that are trying to kill us. The more foes (it kind of feels wrong witting in this terms about the cute lobsters and chicks. Yes, I still haven’t depleted the stock of the word “cute”) the player keeps alive before gathering the flowers, the bigger chance he has of collecting extra lives, but more dangerous the game becomes.


In my first try I was so focused on gathering the flowers that I became a victim of hubris, and died (I have to leave the harsh realistic words out of this game from now on) became a star on level 9, even before getting to the first boss. On my second try, I had a much more respectable run, killing asking both the first two bosses to leave the premises politely, and reaching level 27. The first one, the croc ensemble, was a gracious host and it didn’t took that effort to ask him to leave the party. The second one, the Sperm Whale was a bit harder, since it stayed a bit later to eat all the cake leftovers. Still, none of my runs were worthy enough of putting my name on the high score table, so Palmtree Paul and Louie CF were the ones to have that honour. And i’m sure that would be a better score than any of them could attain. 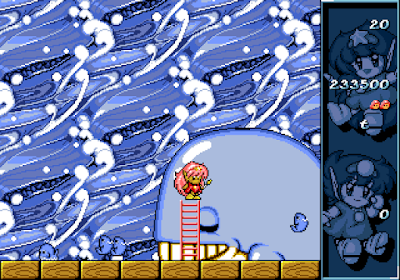 In conclusion, I still feel this is one of the best games on the Amiga, which obviously makes it one of the best games ever. The controls are so precise, and mechanics so tight, leaving all the other great arcade games in this sub-genre, including Rainbow Islands, Qwak, Parasol Stars and Bubble Bubble significantly behind. 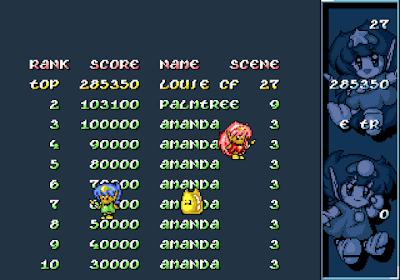