There’s an old saying: “The neighbour’s wife is always better than mine”. Yes, I know it’s kind of misogynistic and old-fashioned, but you can swap “wife” for “duck” or “drugs” and it still makes sense. 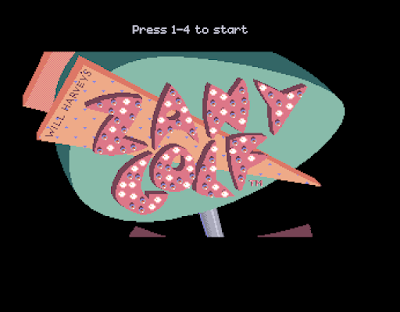 Those years, or maybe months that felt like years, between my “love-at-first-sight” affair with the Amiga at my cousin’s house and actually having one in my bedroom were agonizing. I was stuck with my Spectrum 48K+ that looked as if run by steam at the time, and I tried to go every single weekend to my cousin’s so I could see all that brave new world of colours and sound.

It did not always go according to plan. Sometimes my cousin Walter would spend his afternoon playing some strategy game, like Populous or Powermonger, and all I had left to do was to spend hours staring at the screen. Even so, it was better than staying at home listening to the sound of spectrum tapes loading and eventually crashing. I remember this happening a lot. My tape recorder wasn’t really in good shape, and I spent way too much time cleaning it with cotton swabs. If staring at the screen was better than staying home, some other activities that my cousin suggested made me wish I never got into the bus. At the time, our common aunt had an Amstrad PC computer, and for some reason cousin Walter the Baptist really liked to play with that thing. Yes, at the time PC’s were really crap compared to the Amiga, and this one was of particular shittiness when it came to games. The computer was a CGA, and not only that, but my aunt only had three games: Pirates!, Alley Cat, and some golf game. It was no use playing Pirates!, since even if my cousin was in love with the “Neighbour’s Duck”, he had an indisputably better version at home. He didn’t like Alley Cat because he wasn’t really into arcade-like games. So all it was left was the stupid golf game. I have no idea what was the name of the game because I really don’t get golf at all. 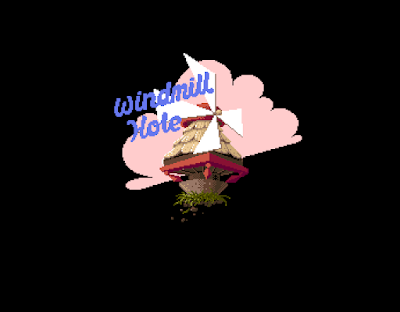 Well, not exactly. At the time Walter and I had been playing Zany Golf for awhile, and this is a golf (actually Mini-Golf) game I can get behind. Windmills, Giant Burgers, and moving holes make it so much more exciting, and it helps that the screen isn’t limited to four colours, including horrible shades of cyan and pink. So I would stay there, staring at Walter playing the boring golf game, while thinking about a much more exciting and pretty golf game.

If spending the afternoon playing dull games on a dull computer wasn’t enough, the road to my aunt’s house was filled with hazards. And by hazards I don’t mean fallen trees or sinkholes. Her house wasn’t far from a troubled gipsy neighbourhood, and even if my cousin was really oblivious to the danger, mostly because he was used to it, I wasn’t. During one of those walks to my aunt’s apartment, we were attacked by some gipsy kids and after running away we were pelted with rocks. Yes, we were in equal numbers, and they were probably the same age as us. But in my defense I'll say we were unarmed and those rocks were really sharp. 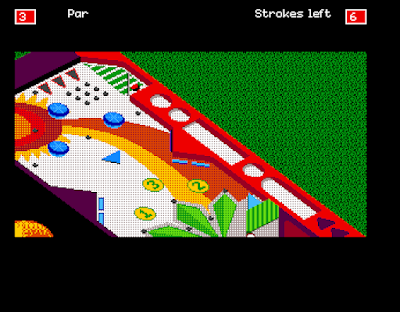 Fortunately, none of those rocks hit me, but unlucky Walter didn’t have the same fate. He got some bruises in his back and buttocks. And what was the prize from finally getting somewhere safe? Playing the stupid “cyan and pink” golf game again. And not even then silly Walter realized what a lovely wife duck he had at home.

This was one of those games that accompanied me throughout the Amiga days. Every once in a while I would fetch that lovely green disk to play some holes (that's the golf lingo, right?). I was quite good at it, but never beat the last futuristic level which had portals and mouse holes (nothing is more high tech than mouse holes). 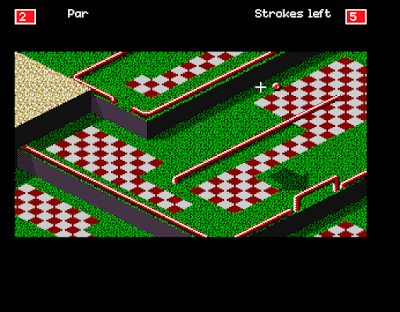 The first impressions after more than 3 decades live up to the expectations. The game is adequately bright and jolly, and certainly beats being pelted by rocks. The music, while feeling low-fi and a bit sloppy, is quite catchy.

I got into the groove very quickly, as if no time had passed at all. Technically, the game definitely feels like an early Amiga game, as there’s not any kind of graphical tricks that would pull people to buy one of this machine. But one thing that impressed me more than any other is that almost every table has a unique gimmick that goes beyond the obvious. This extends to the interface, as the mouse is used besides just pointing and clicking. On the “Fans” level, wiggling left and right activates said fans, while on the Magic Carpet hole, mouse motion is used as a way to direct the ball. 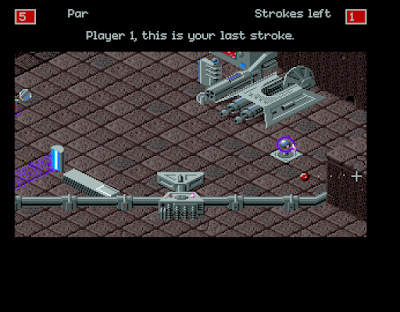 Not every gimmick works as fine as these examples. The “Pinball” level, while seems a great idea on paper (who doesn’t love Pinball?), can get frustrating as it seems it relies too much on luck, and sometimes it takes a long way to get the ball up again into the top hole on the Pinball table.

As expected, I got to the same spot as if no time had passed at all. The futuristic “Energy” level still offers the same frustrating difficulty spike. I thought about abusing save states just to see what lies beyond the mouse holes, but some secrets are better left uncovered.